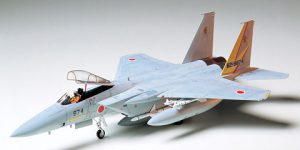 This model depicts the F-15J Eagle, which has been the main fighter aircraft of the Japan Air Self Defense Force since it was introduced into service in 1982. Cockpit, radar, and metal landing gear leg details give the model heightened realism. Parts for external fuel tanks, Sidewinder, and Sparrow missiles are included to depict a fully-loaded Eagle. Six marking options for aircraft from various JASDF units are also included.